Below is a list of our most common jobs. If your piece doesn’t fall under a listed catagory, or you’re not sure,
please don’t hesitate to call or email.
We can help!

We Repair and Recane Furniture & Antiques with:

We repair Scandinavian furniture and chairs from Denmark and Sweden with Swedish or Danish cord weaves – a 3 ply twisted rope-like material..

How do you – I fix or repair Danish corded rope chairs seats? 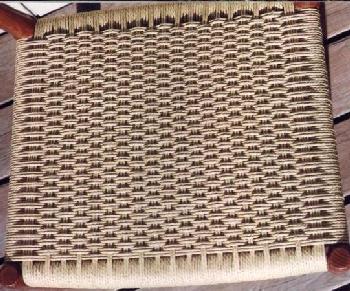 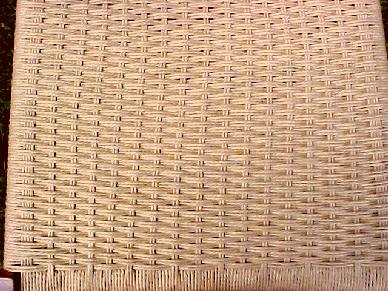 During the 1940’s famous furniture designer Hans Wegner (pronounced “Wagner”) came up with many beautiful designs in furniture pioneering the “Danish Modern Era.” Much of his incredible work was made from exotic teak or rosewood. These classic Danish or Scandinavian chairs very often had seats woven out of a three-ply twisted paper cord measuring 4/32” or more commonly called “Danish Cord”. Another popular maker of these famous Danish Scandinavian chairs was Moller or Mollar.

These cords were strung in pairs from front to back, while another pair was woven side to side over and under the cords which went from front to back. These seats were very durable and long lasting. Many times these chairs I get are being done for the first time after 30 to 40 years!

As time passed, several varieties of these chairs were created as well as some cheap imitation knockoffs.

Two distinct ways of attaching these cords were done on the original chairs. The primary difference is way the cords are attached to the sides. They are either done having the cords wrapped around a second lower bar on the sides in an almost figure-eight pattern or the cord is simply looped over the side seat bar onto these odd looking “L” shaped nails going along the inside underneath. In later knockoff methods (cheaper and faster versions) the cords were stapled onto the chairs! These are no fun trying to remove all the staples.

Below is a picture of a chair with a double rail. 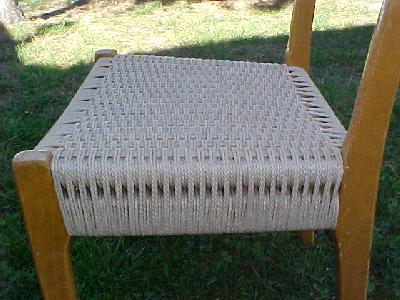 Of all the seats I re-weave, Danish re-cording creates one of the most beautiful seats. A new Danish Cord Seat makes the chairs look almost like they did when they were new!

Little care is needed for these seats. Initially I tell customers to spray several coats of Scotch Guard on them to help keep the cord from absorbing satins. A simple vacuuming once in a while is about all that is necessary. Some people want to stain or color these seats, but I always caution against this practice as it seems to wear and crack away over time leaving a splotchy look to the seat. I prefer to leave them to age and color on their own.

Currently re-cording most Danish Dining Chairs costs somewhere between $175.00-$300.00. It can take most of a day to do one of these. There is a lot of pulling, tugging, and packing the cords and the hands get a real workout doing these! 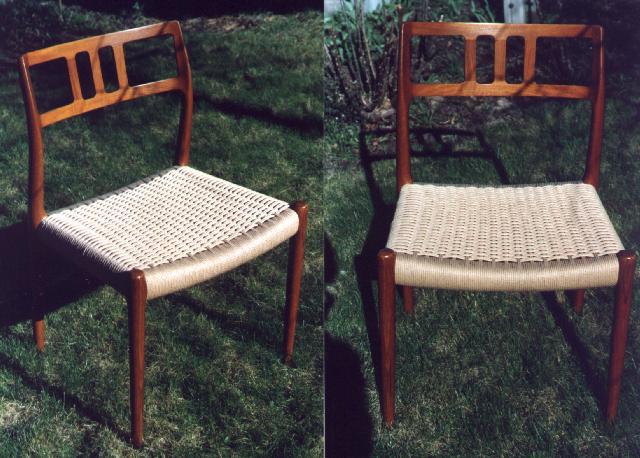 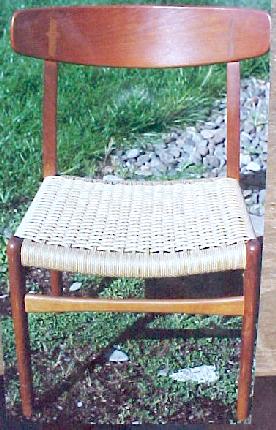 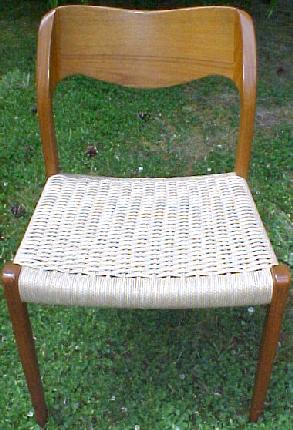 Below are 2 of a set of 6 Danish chairs that were originally upholstered. We removed the old upholstery and were able to repair them with beautiful new Danish Cord. Originally they were offered both ways from the factory. We think the Danish cord looks so much nicer and should last a lot longer too! We also 😉 should have charged by the staple we had to remove, as there were 100’s and 100’s of them to pull out! 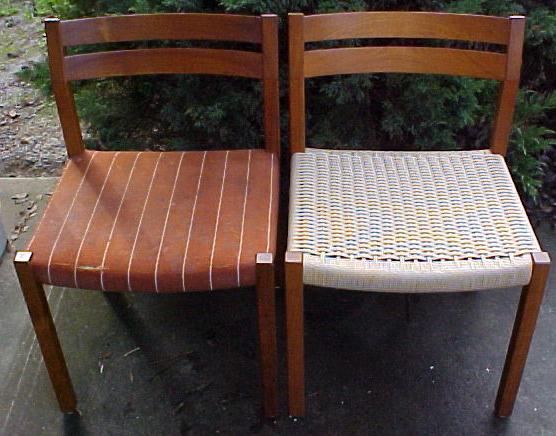 This folding chair and stool (below) are both done with traditional Danish Cord. They are about 35 years old and were recently shipped to me from Virginia, to have new cords put on them. They are done a little differently, but the finished look is very much the same. 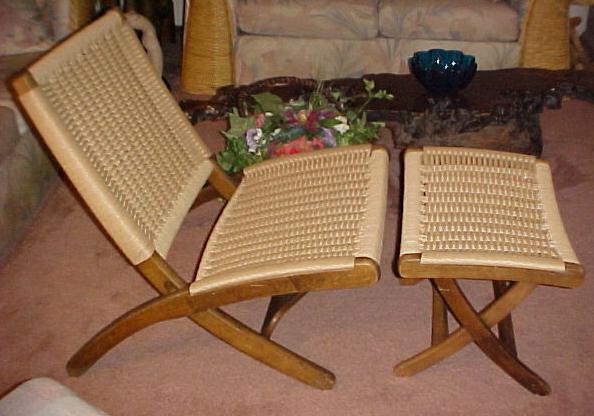 On this type, there are no nails for the cords to wrap around and reverse, so they loop over and around the “stringer” cords and continue being wrapped around the frame until all of the “stringers” have been completed. Then the “weaver” cords are woven around the frame and continue their over under pattern until all the weaving is done. These folding chairs are a major effort to redo, price runs around $1,200.00 to redo a seat and back. 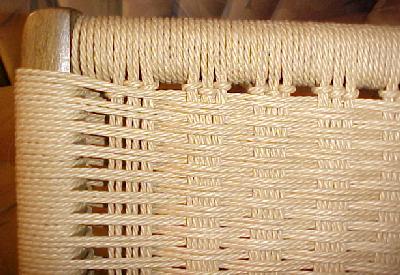 The following is taken from three letters written by the owner of the above folding chair and stool. Added here with her permission.

Randy –
Thank you for the message and the pictures of the chair and stool. They look great, just like the original except not broken! We knew we were sending our furniture to the right place.

We really appreciate your painstaking care… We had no idea our chair was special when we first began the search for its repair, but now we know the design history.
Thank heaven for you and people like you who continue to do time consuming hand work with great skill.

Thank you for tracking the package; I have been tracking it every day as well and eagerly anticipating its arrival. The chair and stool were delivered today as scheduled, safely, and they are now back in our family room in front of the fireplace, where they belong. They are truly beautiful again. Thank you for taking such care with them and for doing such a lovely, painstaking job. I hope you don’t miss them too much!

We very much appreciate your skill and artisanship. I can’t believe that we found you clear across the country, but I am so glad that we did! I hope that you will continue to enjoy your craft for many, many, years to come and that others will be able to look across their rooms and admire your work. The best to you and your family. I hope that your parents are ok as well.

Here is another type of Danish Chair we come across. Called “Danish Peel”.

They have rattan strips of about 1/4″ wrapped around the frame creating their backs or seats.

They are quite beautiful. 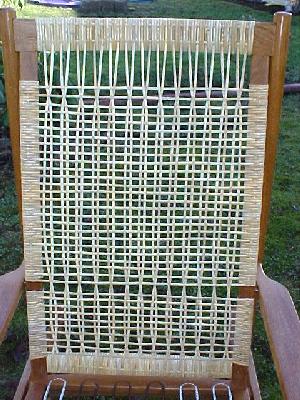 …however the provenance was lost… 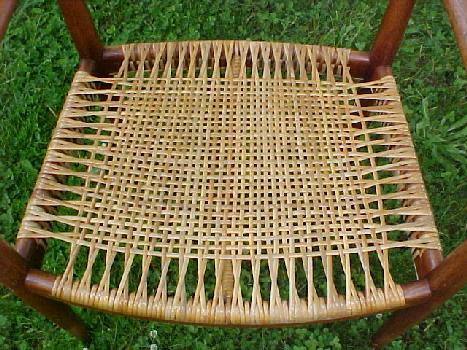 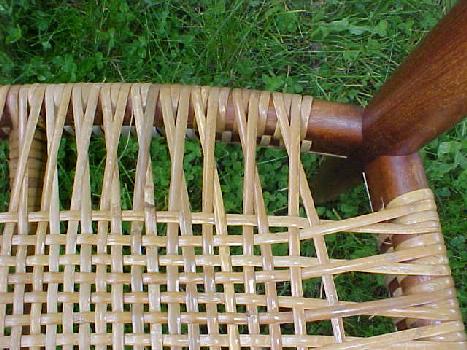 Some danish chairs have a coil spring coated with a Rubber ~ Vinyl ~ Plastic coating over this 1/8″ spring/cable. The cable appears to be a continuous loop, but actually has a little tiny screw about 3/4″ long that has threads going opposite directions on each side. This special screw holds the two ends of the spring together. It is then placed in a special radial track groove at the sides of the chair to hold the cushions up.

Truthfully, its hard to believe it works but it does! If some of your springs are broken we can replace them for you, providing you still have the tiny little screw. If it is lost you may be out of luck! Sometimes we have been able to acquire a few, but even still only a maybe! Sorry, Screws and Springs are No Longer Available! 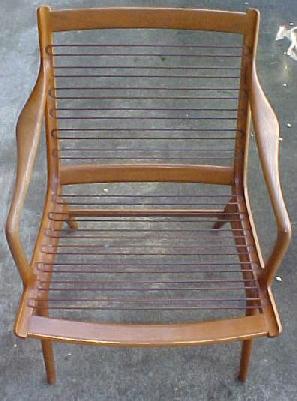 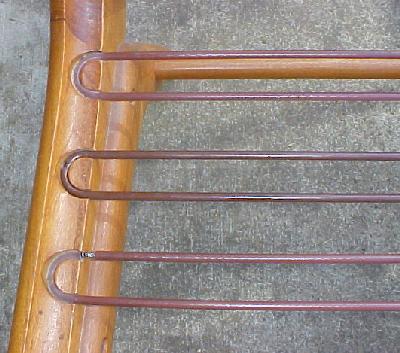 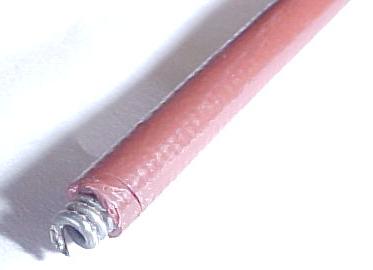 Some danish chairs have a special type of 2″ tan or light brown rubber Pirelli webbing which is stretched across the seat and stapled or tacked to the sides as well as the front of the chair to hold up a cushion. For extra support the rubber straps are woven over and under each other.

On some fancier models there is a type of two part metal clip that attaches to each end of the strap, then a special mating clip is attached to the chair.

If the rubber on your chairs is broken or has lost its ability to hold a cushion up, we can replace these for you. 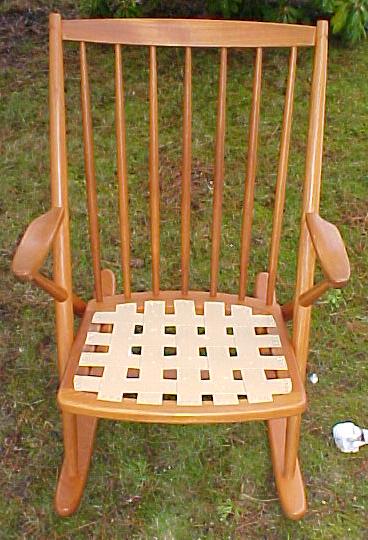 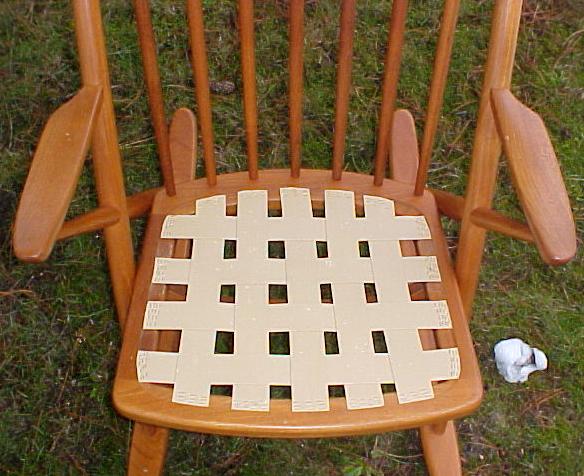 On some fancier models there is a type of two part metal clip that attaches to each end of the strap, then a special mating clip is attached to the chair.

On other chairs, there is a little 1/8″ groove going around the frame. The end of the rubber has a flat metal piece attached to it which then locks down into the groove on both sides at an angle. 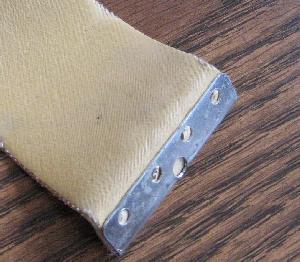 If the rubber on your chairs is broken or has lost its ability to hold a cushion up, we can replace these for you. We can also sell you the rubber webbing and clips like above to do it yourself.

We repair and recane a wide variety of furniture & antiques.
☆ ☆ ☆
Tap or click your furniture below to find out more.